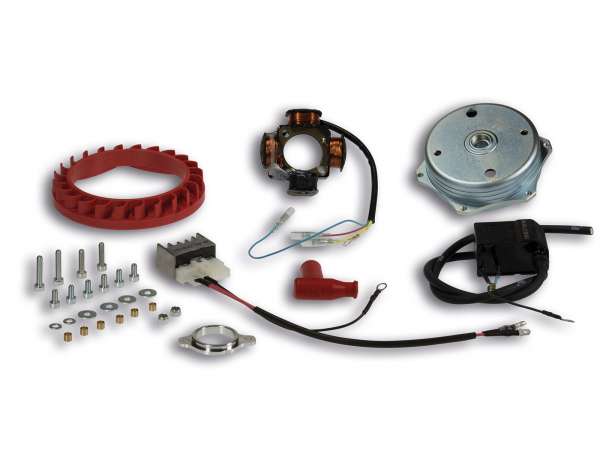 In stock: can be delivered or picked up in the store
Share
Share
Share
P For this item you get fidelity point/s
Description
MKII version of the Malossi VesPower ignition. Now with a new 4-fold bolted impeller with...Continue reading

MKII version of the Malossi VesPower ignition. Now with a new 4-fold bolted impeller with modified wing profile for a lower noise level.

The Malossi Vespower ignition is based on the same base as the well known Vespatronic, Pinasco Flytech or Polini IDM. The ignition base plate has no pickup. The ignition signal is picked up here via the light frequency. With increasing speed the ignition timing is reduced via the CDI. The engine has a high pre-ignition angle for much torque in the lower speed range. This is reduced with increasing speed, at which the exhaust strongly supports the charge exchange. This relieves the engine thermally and increases the torque.

The light flywheel mass provides a very dynamic throttle response and greatly improved acceleration. The smaller fan blades fit perfectly to the higher speed level of the tuned engine where the large blades of the original fan wheel would turn empty. The ignition is also suitable for everyday and touring engines due to the optionally available and adaptable flywheel mass rings. Here the increased flywheel mass helps the engine to a smoother engine running and an improved elasticity in the upper gears.
The stiffening fins of the plastic vane wheel prevent effectively a tearing or breaking.

For the PX models there is beside the standard VesPower ignition with 1200gr. also a 900gr. race version. This is then however afterwards no longer upgradeable to more flywheel mass. 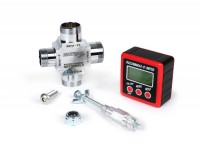 Digital degree wheel -TSR Buzzwangle Ignition and Port Timing Tool- for digital measurement of ignition timing and port timing of 2-stroke and 4-stroke engines
In stock: can be delivered or picked up in the store
€91.95 *
*incl. VAT plus shipping costs