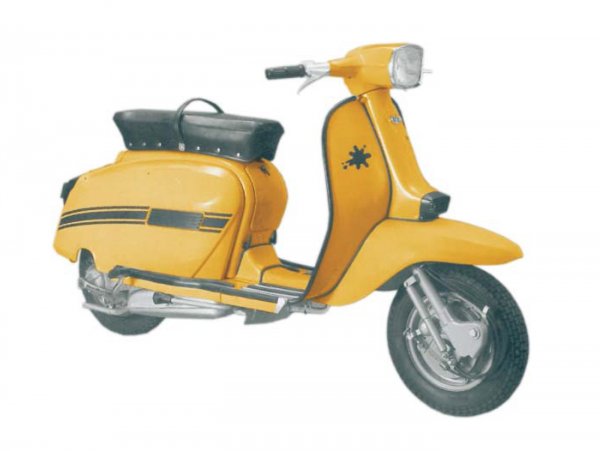 The GP/DL range supersedes all LI, Special, SX and TV models in 1969. In most countries the models were marketed as Lambretta DL, while in the UK the distinctive label Grand Prix (GP) was used similarly to the earlier GT, to create a link to the then booming Grand Prix racing. This relation is reflected by the adverts and slogans of the time (“A real goer!”) and perfectly suits the sporty appearance of the scooter. The DL / GP range was available with the usual three capacities, even if the engines had been significantly reworked.

The new bodywork, styled by the famous Italian automotive designer Bertone, is shorter and slimmer than before. The legshields and horcasting have been shortened to lower the handlebars, headset and headlight are now rectangular. The front mudguard has a more aggressive pointed shape, forks, hubs and wheel-rims are now painted silver as standard. The taillight is made from black plastic as all other plastic parts are coloured black, while any chrome has been completely abandoned. The plain side panels have black rally-stripes attached and incorporate grilles which are also made from black plastic.

The DL 125 takes over the engine of the 125 Special. Engine numbers still start with LI125S. Besides the rear sprocket, which is no longer riveted together but made from billet steel, the main change is the crankshaft, which features a much stronger taper to take the flywheel. Also, the drain valve on the inlet rubber hose was abandoned.

Even if the DL 150 engine also retains the engine numbers of the SX150, changes are much more refined: in addition to the aforementioned changes, the port layout of the cylinder is altered. Also, a larger carb with 22 mm bore is used, which does not raise peak power delivery very much (9,4 hp), but increases the useable rev range.

Also the 200 cc engine still bears the SX200 engine numbers, even if a number of significant changes are made. The improvements to crankshaft and inlet rubber hose are the same as with the smaller models, but the gearing is changed completely to a much shorter overall ratio (5,22 instead of 4,80 on the SX). The gearbox was taken over from the LI 125 Special, but primary gearing was reverted to a 18/47 sprocket ratio. The engine now keeps up speed much better even under adverse conditions and reaches 110 kph top speed with greatly improved acceleration. A 22 mm carb is used as on the DL 150.

But the ultimate improvement for the DL 200 was the introduction of an electronic ignition, which was developed in co-operation with Ducati. The DL 200 Electronic is easily recognised by a sticker on the legshields and a different seat. This newly shaped seat with its structured cover is a clear reminder of the 70s sports car interiors. Unfortunately no production numbers of the Electronic are known, as it was produced from 1970 onwards alongside the standard version with points ignition.

Also colour schemes are changed drastically. The late 60s fashion of colourful designs is taken over, so that the DL 125 is available in turquoise or white colour. The DL 150 is sold in Italy in red, whereas some export-markets receive two-tone colour schemes. While the basic colour is always white, side-panels, horncasting and mudguard are available in red or blue. The DL 200 in Italy is available only in ochre, while customers abroad can chose from either ochre or red.

During the short production run, some minor changes are made. Early models have the horncasting cover and rear frame grille painted in the same colour as the rest of the bodywork, while later these parts are superseded by black plastic items. Also the alloy choke and petrol tap levers and the grey plastic glovebox are being replaced by black plastic versions. The very latest models had screws M6 x 30 instead of nuts and bolts to hold the chaincase cover.

horncasting-grille, rear frame grille and tank flap made from metal

horncasting-grille, rear frame grille and tank flap made from plastic