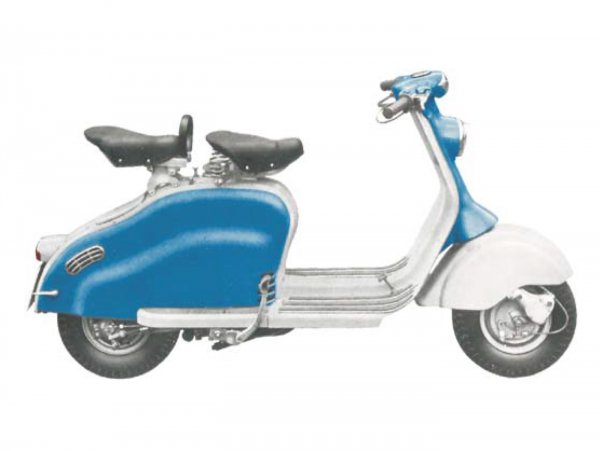 In October 1954 the first Lambrettas with 150 cc capacity hit the market. The increased power output also brought an increase in top speed: Innocenti stated 88 kph as standard Vmax, while the consumption figures stayed the same as before. Also the open-frame D 150 models received the fan-driven cooling system of the LD version. Also the dreaded Teleflex gearchange-cable is finally superseded by two standard cables, a system to be continued with all subsequent Lambretta models. For the first time, a damper is mounted at the rear along the torsion springing to improve the handling.

In January 1957 a reworked LD model appeared, both in 125cc and 150cc capacity. The engines were left unchanged apart from the kickstart mechanism, however the outer appearance was significantly modernised.

The horn had been moved to the headset, were a speedometer was held by a newly-designed headset cover, which also covered all cables now. The rear of the scooter was redesigned and a cast rear light was bolted to the frame. A toolbox was fitted behind the passenger seat and the air induction is via the rear of the frame, which improved the rev-range of the engine.