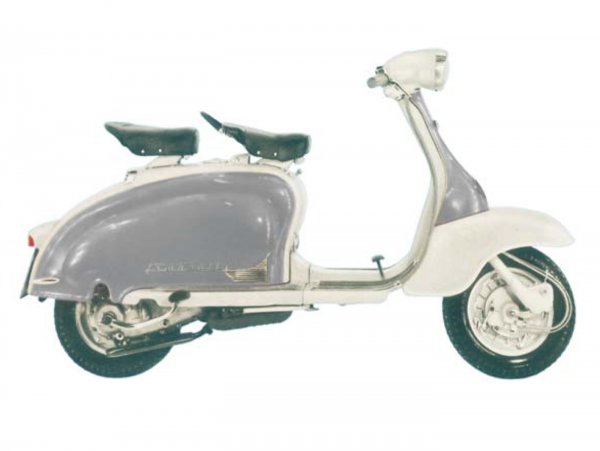 In October 1959 the Lambretta LI Series II was introduced. The advertising concentrated on the proverbial “Lambrettability” and the next great success for Innocenti was almost certain from the start. In fact the Series II with 270.000 scooters made, was the best selling Lambretta model so far. At the engine only a few details were changed, e.g. a slightly longer Cylinder with matching piston was used. All models now have the air intake under the rider's seat, which had already been introduced with the latest Series I models. The biggest difference however is the headlight, which had been moved to the headset. The LI 125 only has a front saddle as standard, whicle the LI 150 also features a rear saddle for the pillion. The additional rear saddle for the 125 was available as an option as well as the dual seat. Also the design of the floorboard shows the differences between the capacity- classes: while the LI 125 only had alloy struts, the 150 received alloy ribs with grey rubber strips and end caps. The rear lense was changed and increased in size during the production run. The rear lense gasket was still white and also most of the rubber parts stayed grey with the exception of the kickstart rubber and stand feet.

In January of the same year the TV 175 Series II had reached the shops, introduced as “the sportsman's scooter”. The main visual difference is again the new headset which incorporates the headlight. The TV 175 had the same alloy ribs with rubber inserts on the floorboard as the LI 150 and sported a dual seat as standard, while single seats were available as an option. The front forks with additional dampers were retained from the Series I, while the front brake drum and the forklinks were redesigned. The rear lease and the horncasting were changed during the production in the same way as the LI's, and also the rubber parts had the same colour scheme.

Apparently with the first batch of TV Series II models, the frame had been designed too weak. This caused some problems, so that Innocenti decided to reinforce the frame of the models which were just in production. In order to do so, the frame was cut up along its length and a steel plate was welded in. With the following models, stronger frames were used from the beginning. The two versions can be distinguished by their frame numbers: the first version with the reinforced frame has a frame number starting with 1 while the second version starts with 2.

The engine had been redesigned as well along the lines of the LI, so that all the weaknesses of the Series I were overcome. The stroke was reduced to only 58mm (with 116mm con-rod). Cylinder and piston were altered accordingly and the whole transmission system including the kickstart mechanism and the clutch were now shanged to the proven system of the LI models. Peak power was still 8.6 hp even though the size of the carb had been reduced to 21mm, and top speed was even increased to 104 kph. The colour schemes now include light blue or ivory. At the end of the production time, 41.787 TV Series II had been made.

Air filter is held by a clip (as Series 3)