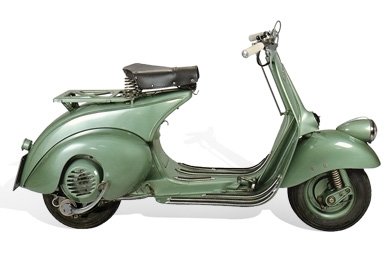 The V1T was the first model with 125 cc produced by the Piaggio factories. Compared to the V98 it was technically revised in essential points. In addition to the cylinder bore, which was enlarged from 50 mm to 56.5 mm, the mounting bolts of the shift segment were doubled (in Tecnica: "the mounting bolt of the shift paddle cover") in order to eliminate the malfunctions that had occurred on the V98. The carburettor is still a Dell'Orto TA 17, but now with a flap on the air filter as a choke, operated by a cable with a lever under the swing saddle. The steering tube is now led down to the front swing arm on the right side of the scooter instead of the one on the left in driving direction, which gets a completely new suspension system. Instead of the former leaf springs a coil spring is now installed parallel to the steering tube.

The shift linkage is now guided from the brake pedal to above the mounting screws of the engine swing arm inside the frame tunnel. Also the rear wheel now has a suspension consisting of a coil spring and a hydraulic damper.

The bonnet is mounted movable with two hinges at the top and is fixed to the frame with a spring lock at the bottom. The opening in the bonnet, which was still circular on the V98, is now open at the bottom on the V1T to allow the engine to swing. The opening in the frame through which the intake manifold is led from the carburettor to the cylinder is enlarged to give it more freedom of movement with the now sprung engine. The saddle is now also suspended at the front and a luggage hook is installed below the saddle tip.

Finally there is a simple side stand, so that one does not have to lean the Vespa on the footboard when parking. Light switch and tail light are still the same on the first models as on the V98, but then they are changed: the switch is fan-shaped with a black plastic base and a chrome cover; the tail light has no frame anymore.

The horn gets a new shape and a central adjusting screw on the outside. The front headlamp with Siem disc and chrome ring has a diameter of 95 mm and a decorative fin made of chrome-plated Zamak (die-cast zinc). The carburettor flap has a spring and small rubber buffers are fitted to the frame to dampen the vibrations of the flap. The tank is equipped with a fuel tap with reserve position, which is opened or closed with a hook-shaped (on the V98 still ring-shaped) control lever. The fuel filler cap is spring loaded on the first models and quick release, as it was not installed again until 1955 on the GS. The newly designed rubber grips now feature the Piaggio logo, while the aluminium plugs remain on the handlebar ends. In the leg shield emblem, the "Genova" lettering is slightly larger than on the V98.

In model year 1949, the cylinder and cylinder head are modified for better cooling. From now on the cooling fins of the cylinder are no longer perpendicular to the cylinder base, but parallel. This shape is still used today in all later models. The piston pin diameter is increased from 12 mm to 15 mm. The flange of the intake manifold is fixed with three instead of 2 studs. (Source: GSF)

Description
Vespa 125 (V1) The V1T was the first model with 125 cc produced by the Piaggio factories....Lire la suite