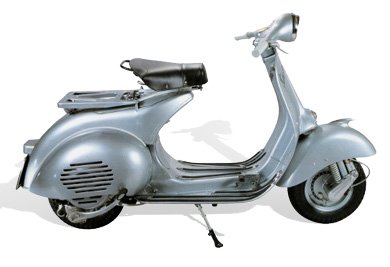 The VB was the successor model of the VL ("Struzzo") in the 150s and, with the exception of the Vespa 150 GS built until 1961, the last wideframe model of Piaggio's, which was then replaced in 1958 in its displacement class by the VBA with large-frame frame, which was equipped with a rotary valve for the first time.

The engine of the VB is identical to that of the Struzzo, only the carburettor was now a Dell'Orto MA19D. However, fundamental changes were made to the frame compared to its predecessor: The wiring harness and cables were now routed in the frame tunnel up to the handlebars, which were now designed as closed die-cast aluminium handlebars, as was already the case with the GS/3 - the age of tubular handlebars was thus over. The shape of the speedometer with white dial and the red indicator light on the steering head of the Struzzo were retained. (Source: GSF)