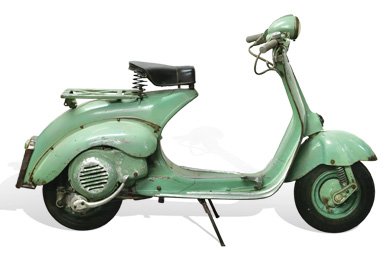 The "U" (utilitaria = practical) was Piaggio's savings model and was quite a flop: everyone who had enough money at that time bought the next better model. That's why only about 2000 of the 6001 cars built were sold, 3500 of them went to Iran in 1955 (after being stockpiled by Piaggio for two years), where they were converted for the post office with a huge luggage rack plate plus front carrier. What happened to the remaining 500 or so copies has not been found out until today. But exactly the relatively small number of pieces combined with the unusual optics makes the "U" a sought-after collector's item, for which - if one is offered at all - prices in the 5-digit range are called up.

The most conspicuous features of the "U" are the engine block, which has been degraded to a cover plate, and the relatively small headlamp, which sits on the handlebars of an Italian Vespa for the first time. The bonnet is bent at the frame and visibly screwed to the frame with 4 slotted screws. Also the smaller luggage compartment jaw is fixed with 8 screws; a grey rubber profile is underlaid. The castrated design of the bonnet allows unhindered removal of the spark plug, the luggage compartment lid has no lever and must be lifted at a small elevation and a shaped spring. The "U" is the first Italian model where the headlight is on the handlebar. The relatively small headlight with Ø 95 mm made of cast aluminium is only used on this model and its decorative ring is the only chromed part of the whole scooter. The front fender is smaller and narrower than on the more expensive model and is shaped for steering tube and damper spring. The front swingarm has no hydraulic shock absorber as on the 1950 V15T model. The smaller saddle with dark green painted springs has no front spring. The brake pedal is made of unpolished aluminium and has no rubber but a cast waffle pattern. The tail light is taken from the V33T. The step strips are made of punched aluminium without rubber insert and are available on both sides and on the tunnel only 2 times. For economic reasons the whole Vespa is painted in most parts (frame, lamp and tail light housing, saddle springs, handlebars and handlebar clamp, steering tube, swing arm and rims, cylinder cap and fan cover), even the Vespa lettering on the leg shield is only painted. The galvanized side stand consists of 30 mm cranked round material at the top and bottom and has no rubber base. The light switch has a grey plastic cover like on the VM1T from 1953. There is no handlebar lock and the fuel filler cap is loosely screwed on.

The engine consists of parts from the 1953 VM1T (gearbox, clutch, ignition base plate and pole wheel) and remainders from 1951 engines (cylinder, crankshaft, fan cover, cylinder cover). The kick starter is made of unpolished aluminium with waffle pattern without rubber coating, the fuel tap is inside under the carburettor flap. (Source: GSF)

Descrizione
Vespa 125 (U) The "U" (utilitaria = practical) was Piaggio's savings model and was quite a...Continua a leggere