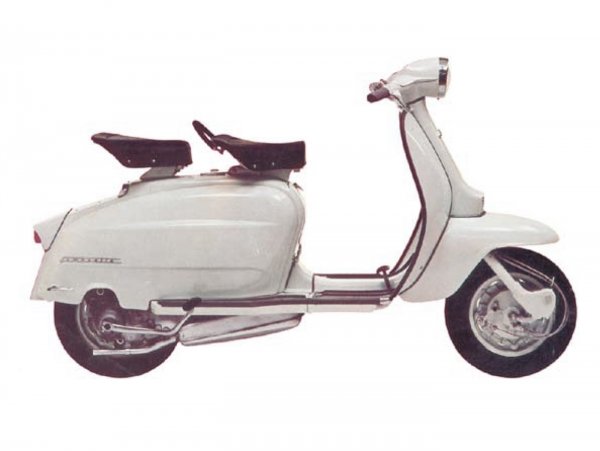 The 'Slimstyle' Lambretta is the start of the unforeseen success-story of the Lambretta. All subsequent Lambrettas with the large frame trace their origin directly back to the LI Series III. Even the Lambretta Series 4 which is currently in planning stage is based on that frame and seems to have many parts in common with the DL/GP models.

The outer appearance of the Series III changes drastically compared to the Series II to a much more dynamic and streamlined design which is why the Series III is also called “Slimstyle”. Headset, horncasting, mudguard, side-panels, legshields, floorboards and frame are not only much sleeker, there are also significant savings in production materials and weight.

The LI Series III is sold with two single saddles as standard, while a dual seat is available as an option at additional cost. A new feature is the badge holder behind the seat, which replaces the grill of the earlier LI Series and holds a LI 125 or LI 150 badge depending on the model. The speedometer of the 125cc version ends at 80kph, while that of the 150cc tops at 100kph.

The technical details under the panels however had been changed only slightly. A new item is the Dell´Orto SH carburettors with centre float, which replace the old MA/MB card whith their side floats. The altered carb is also the main reason for the reduced consumption figures and increased performance (probably together with the reduced weight and lower wind-resistance). The engine cover is slightly altered to complement the sleeker panels. Also the intake system and the exhaust are altered. At the chassis, the proven system was basically retained, even if every single component was newly designed. For instance, the rear shock absorber of the Series III is slightly shorter than its predecessor.

Due to the long period of production of the Series III, many changes are made to the scooters during the production run. Early Series III Lambrettas still had the old ignition system of the Series II. This was later replaced by a stator plate with six coils and a beefed-up flywheel. In 1965 the chrome ring under the headset is dropped, the gap is covered by a longer neck of the headset. From frame no. 94018, the LI 125 got a close ratio gearbox, which was also used in the LI 150 Special, known as the 'Pacemaker' gearbox.

In 1967 Innocenti finally produced a mystery on two wheels, the LI 125 Series IV. It is widely unkown, as it was by-and-large a Series III, but the frame numbers started with 125LI4. Looking closer, there are however some slight differences to the standard LI: the side-panels no longer have handles, but retaining clips like the DL. Gone is also the LI 125 badge behind the seat, which is replaced by an Innocenti badge as it was used on the SX. The horncasting badge is rectangular and reads Innocenti in silver above blue. Under the panels, the toolbox now is made from grey plastic, apart from that not much is changed. The Series IV is only available in light blue (8070) while all interiors are painted white (8059). It is not known if any special advertising materials for the Series IV was produced.

The distance between the two bridgepiece-screws is 120mm (as Series II). The side-panel buffers are entirely made from rubber.

The distance between the two bridgepiece-screws is now 132mm. Side-panel buffers are being held by a clip.

The chrome-ring under the headset disappears. The side-panel locking mechanism is simplified (from January 1966).

Description
Lambretta Li 125 Series 3 The 'Slimstyle' Lambretta is the start of the unforeseen...Lire la suite