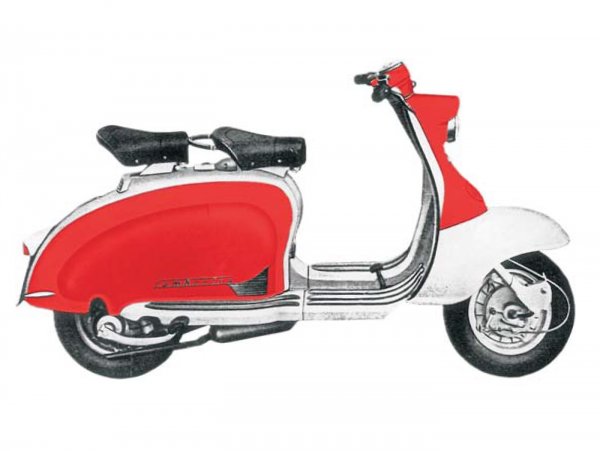 On 10 April 1975 the first Lambretta TV “Tourismo Veloce” was revealed to the public. The new scooter was squarely aimed at the Vespa GS 150, which had been a groundbreaking success for Piaggio. The Tourismo Veloce was definitely a huge step forward for Innocenti, both in terms of styling as well as performance. Contrary to previous models, the front mudguard was fixed to the bodywork and did no longer turn with the front wheel. The newly designed side-panels had air intakes to aid cooling and the rear running boards continued the floating lines of the scooter. The headlight was mounted in the horncasting as with the Model D. A real gem was the rear light with its red centre piece surrounded by two orange brake lights. A 120 kph speedometer was fitted as standard, as well as the adjuster thumb-screws in the levers, which unfortunately disappeared during the production run. New, larger 10 inch wheels offered better roadholding and increased comfort. Also the suspension with springs integrated in the forks and a rear shock absorber led the way for all subsequent Lambrettas. Besides, the TV was the first Lambretta with additional dampers at the front as standard. The rear shock could be taken off easily to lower the engine to gain access to the cylinder.

This was necessary as the engine was a completely new design with a horizontal cylinder instead of an upright standing one. The engine with a capacity of 170cc and a power output of 8,6 or 9,0 hp (depending on the source of information) provided superior acceleration and a remarkable top speed of 102 kph. Both the carburettor with its 23 mm diameter and the crank with its 60mm stroke opened up new dimension for Innocenti. Also the transmission was a completely new design as it replaced the driving shaft with a duplex chain. The TV had an air intake through the frame (hence the name “framebreather”) and floor mats instead of ribs. The exhaust was held by a large ring nut which was dropped at all later models. All rubber parts and cables were coloured grey, apart from the stand feet and the kickstart rubber, which were black - probably just to act as the proverbial exception from the rule.

The air intake is through the grille behind the passenger seat and through the frame. The air filter is a wire mesh. The chain tensioner in the engine is not adjustable. The very first LI 150 models have TV side-panels with air intakes. The front saddle has no catch. The first LI 125 models have neither steering lock nor legshield-rubbers.

The air filter receives a paper-inlay. The front saddle has a catch, the chain tensioner is now adjustable. 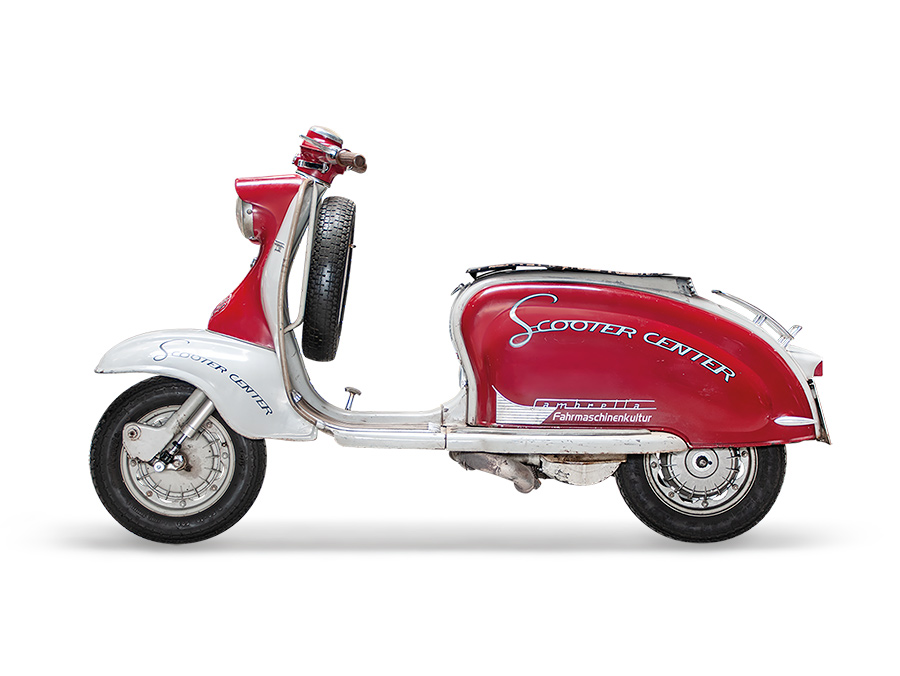