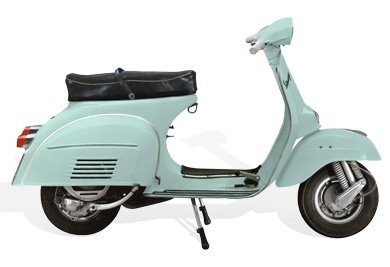 With the Vespa Super 125 (VNC1T), the successor to the VNB6T rolled off the production line in 1965. The chassis was taken over from the GL 150 and garnished with a new fender. The handlebar is completely new and will find its way onto the Nuova 125, Primavera and ET3 models. A bench seat is also available as an optional extra. A nice gimmick is the central locking system, so both the handlebar and the toolbox lock can be locked and unlocked with one key. The Super comes on 8-inch tyres with self-ventilating, cast-iron brake drums. The engine is very close to that of the VNB6T, but thanks to a modified carburettor it is a more powerful Ditsch. An improvement of the suitability for everyday use was achieved by using an external ignition coil. The Super 125 was painted in light green (MaxMeyer Code 1.298.6303).

Description
Vespa 125 Super With the Vespa Super 125 (VNC1T), the successor to the VNB6T rolled off the...Lire la suite