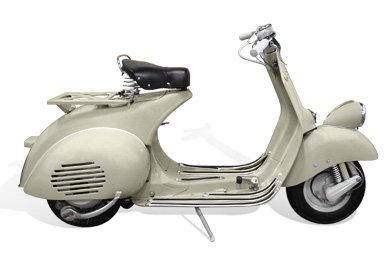 The VM1T is the evolution of the V33T and gets a completely new engine with cross flushing and the same 54 mm dimension for piston stroke and bore. The piston has a new, smaller shape of the nose and on the new cylinder head the spark plug is no longer installed centrally but at an angle of 45°. The inlet and outlet openings of the cylinder are now arranged 90° crosswise (outlet downwards, inlet to the side), so far they were mostly next to each other towards the luggage compartment side. The 3-speed transmission gets stronger gears and a larger shifting cross, the clutch is strengthened from 2/2 to 3/3 cork/steel discs. The new crankshaft no longer has mushroom-shaped cheeks, but round cheeks which allow better balancing.

The flywheel magneto ignition gets a new pole wheel with elongated inspection holes and ignition contacts which can now be easily adjusted with a screwdriver. The fan wheel cover has no more slots, but is closed except for a central round opening. The aluminium cylinder cap is reshaped and now encloses the entire cylinder. The toothed kick starter segment has new dimensions.

The rear brake drum is reinforced with a ring to minimize deformation due to thermal stress. The exhaust tailpipe is now led out just on the left side under the baggage compartment shoe, on the V33T it still ran to the rear on the right under the engine. The middle and rear parts of the frame are reinforced. The reinforcement in the upper leg shield bead, as well as the support plate of the leg shield cascade and the rear frame part are widened to give the frame a higher stiffness. The engine block, which is still made of aluminium, gets a new shape: it is no longer open at the sides, but has seven air slots through which the air for cylinder cooling reaches the fan wheel.

The swinging saddle is more comfortable and is equipped with two double conical springs and a chrome-plated handle for the passenger. The saddle cover is dark green. The diameter of the headlight on the fender has been increased from 95 to 105 mm, the rectangular taillight is wider. The shell-shaped light switch with 3 switch positions plus kill is now completely made of grey plastic and bears the Vespa lettering as a relief on the cover.

Clutch and throttle cable are now also led out of the grommets in the leg shield tunnel and then inside the handlebar tube to the lever or throttle slide. There are some minor changes to the clutch and brake lever, also on the brake lever the receptacle for the cable nipple is now inside the lever receptacle.

The footplate end pieces are no longer grooved up to the rivet and now have a small tongue instead, which holds the footplate rubbers better. Also the rivet heads have a different, now drop-shaped form. Compared to the V33T the tank capacity increases by 1.25 litres to 6.25 litres. The total weight of the scooter increases by 1.8 kg.