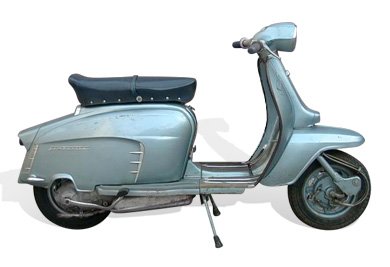 The LI 150 Special was offered from 1963 and closed the gap between the Lambretta LI and TV. Designed as a sportier version of the LI it looks astonishingly similar to the TV. Only the badges, colour scheme and the missing disc brake at the front make clear that this was indeed a completely different model. The dual seat was fitted as standard.

The engine now had a modified cylinder with a newly designed head, which is responsible for the increase in power by 1,65 hp compared to the LI, giving a power output of 8,25 hp. As the production code of the engine is still 150LI, the engine can only be distinguished by the wider silent blocks.

The 150 Special's gearbox has a closer ratio which makes it highly sought-after by tuners from the start. However the third gear, even if strong enough for all standard scooters, unfortunately proves too weak for tuned engines, causing frequent gearbox failures. This was later overcome when Innocenti introduced an uprated version. As the 150 Special was advertised in the UK with the band Gerry and the Pacemakers (initially the Beatles were asked), the scooter is often referred to as the Pacemaker.

When sales started to dwindle in the mid-sixties, Innocenti decided to introduce two special versions of the 150 Special, the Silver and Golden Special. The scooters were painted in a silver and golden paint scheme, which is not too spectacular in the case of the Silver Special, as they were available in silver anyway. The only difference in this case was the small “Silver” badge at the legshields. The Golden Special however came in a unique gold-metallic colour scheme. The “Golden” badge plus the dark green dual seat additionally set the scooter apart from the standard models.

Altogether, 69.529 LI 150 Specials were built, which almost all left the factory in their silver or golden livery. Only for the British market a different two-tone colour scheme with white base paint and a number of colour options for the panels was available. The Pacemaker was sometimes even shown with a disc brake in some adverts, but apparently never sold like that.

From October 1965 on, also a 125 version of the Special is produced. Besides the badges and the metallic blue paint scheme, there is no visible difference between the 125 and the 150. Technically however the 125 is ahead of its elder brother. The combination of 20mm carburettor, new cylinder porting, raised compression and central squish head produced 7.12 hp and 90 kph top speed. The lower gearing makes the 125 accelerate faster than the 150. The gearbox was later used for the sporty DL/GP125 and 200 models. Towards the end of the production run, the engine was further revamped and in this version was then used in the DL 125. Both the engine cover and the clutch of the DL were already used here as well as the rivetless rear sprocket.

At about the same time the white switches were beung replaced by black items, the clip-on panels are introduced, the toolbox is now made from grey plastic and the old horncasting badge is replaced by the new rectangular version. The seat however was covered blue throughout the whole production period.

The 125 Special was produced until October 1966, altogether 29.841 scooters were built. Only very few of them had not been painted metallic blue but white.

Painted toolbox made from steel