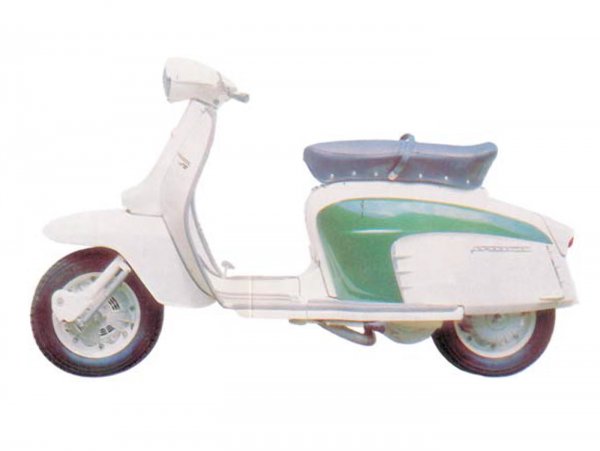 As the TV 175 was a spot-on success in the UK, the British Lambretta Concessionaires urged Innocenti to produce a scooter with more capacity, power and - of course - top speed. Initially Innocenti was not too keen to take up the idea, but finally agreed to produce a 200cc Lambretta even if the UK importers had to take care of any warranty claims themselves.

It is unclear whether the first TV 200 Lambrettas were only bored out 175cc versions or if newly cast engine casings were used from the start. However all the specific 200cc engine casings were used with a crank with 107mm con-rod and 66mm piston plus a taller gearing. The cylinder featured a relatively low inlet port and also a rather low and wide exhaust port. As this layout led to frequent problems with the pistons rings breaking, a cylinder with smaller but higher exhaust port was introduced later on. The cylinder head was always a centre squish type.

The main problem of the TV200 was the engine vibrations which often caused the exhaust mount to break. This however did not stop the TV 200 from becoming a success in the UK. Unprecedented top speeds and powerful acceleration counted more than reliability so that the sales department soon branded the TV as “Gran Tourismo” scooter with reference to the famous GT sports cars of the time. Indeed the 10.75 hp engine was capable of up to 112 kph top speed, even if under favourable circumstances only as the engine struggled to pull the tall gearing.

After a while the TV 200 was also sold in France, Switzerland, the US and Scandinavia. The design changes followed those of the TV 175.

Description
Lambretta TV 200 Series 3 As the TV 175 was a spot-on success in the UK, the British...Continue reading