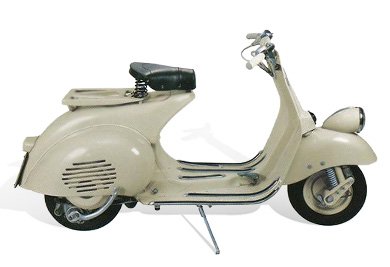 The VN is the last Italian model with the headlight on the fender and the last wideframe of the 125 series. The successor of the VM is considered a cheap model, as the 150 cc models are now more important for Piaggio and some - mainly optical - things are slimmed down. For example, compared to the VM, there are only 7 (instead of 9 before) kick bars, the swingarm cover is no longer needed, lettering and emblem are produced cheaper and the main stand has no rubber feet. But the engine of the VN is the same as the one of the predecessor VM, only the nose of the piston gets a flatter shape to (quote Vespa Tecnica) "avoid the metallic noises". The kick starter and brake pedal are made of cast aluminium and have a waffle pattern on the tread surface, the rubber covers are saved. (Source: GSF)

Description
Vespa 125 (VN1/VN2) The VN is the last Italian model with the headlight on the fender and...Continue reading