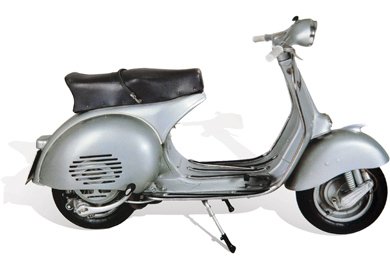 In 1957 a Vespa GS VS1T was offered for the first time. It was rightly called Gran Sport, as ten years of experience in competition driving had been incorporated into the model. So the engine is derived from the Sei Giorni factory racers. No other Vespa before had as much power as the GS.

The engine is square designed (57 mm bore x 57 mm stroke) and a direct intake with Dell'Orto UB23S3 (equipment main jet: 103, idle jet: 50, mixing tube: 260 and needle E21 on 3rd notch from above) carburettor. The clutch has been reinforced to match the performance. The engine of the GS 150 is famous for its turbine-like revving and 8 hp at 7,500 rpm was an official announcement at that time. Even though the factory specification of a top speed of 100 km/h could probably only be reached in the rarest of cases, the GS 150 is a milestone. So the mixing ratio of 6 % is accepted for better or worse.

Also in stylistic terms Piaggio oriented himself to the Sei Giorni racers, which were only delivered in very small numbers to selected Italian dealers at that time. The most striking feature is, apart from the very elegant silver (MaxMeyer Code 15005) in which the GS was delivered, the aerodynamically shaped leg shield. Thus the design of the GS also heralds a completely new era of scooter construction.

The GS was marketed as a sports model and scooters became a status symbol. The competition for Piaggio was not very big at the time, German and British scooters were not exactly what drew you out from behind the stove. And the big rival Innocenti could not really score with the D and LD models either. If we let our gaze wander further over the frugal sheet metal dress of the GS, the very large and high side hoods, the deep-drawn front fender with a highly polished nose and the handlebar head with 115 mm headlights stand out. The speedometer scale reaches up to 120 km/h and the ignition lock integrated in the steering head also serves as a switch for various electrical consumers. The 12-litre tank is hidden under the dark blue seat. The most striking feature of the GS 150 first series are the external cables on the handlebars.

In 1956 the GS 150 VS2T was the successor. From a technical point of view, apart from the ignition system, only minor changes were made, such as the spraying of the carburettor and the connection of the exhaust manifold to the cylinder. The union nut has to give way and from now on the exhaust is clamped to the exhaust manifold. Visually the newly designed handlebars catch the eye immediately. Bowden cables and cables are now inside, the speedometer is white. The saddle is dark blue. The leg shield is protected with a chrome-plated mono slotted tube against the rigours of everyday life. The machine comes - like its predecessor - on so-called star rims with 3.50-10 inch tyres.

Despite the new model year, nothing changes in the 1957 GS 150 VS3T compared to the previous model except the frame abbreviation.

With the GS 150 VS4T from 1958, even if only minimal changes have been made. Starting with engine number VS4M 0045976, the Dell'Orto UB23S 3 is installed with the following equipment: Main jet 103, idle jet 40, mixing tube 260, needle E21 on third notch from top. The rear brake pads are no longer attached to a pin in an overlapping manner. For a better working brake each pad is fixed to its own spigot. The frame remains unchanged. The most striking feature is the rear tail light, which now has an integrated brake light. The very nice rear light housing is chrome plated, the plastic glass for the rear light is red, the one for the brake light is orange. In addition, the locking mechanism for the side covers has been simplified.

With the GS 150 VS5T, the last series of the GS 150 was introduced to the dealers in 1959 and was sold until 1961. With the engine number 0070120 a new cylinder head with a so-called jockey cap form is installed, which is to increase the elasticity of the engine. A Dell'Orto UB23S31 now takes over the mixture preparation. The nominal speed is now reduced to 7,000 rpm. The star rims are replaced by self-ventilated die-cast aluminium brake drums, whose wheel hub is covered by a stainless steel cap. The square speedometer has given way to the larger, shell-shaped speedometer with a scale up to 120 km/h. The chrome-plated SIEM headlight bezel has an integrated lampshade. On the first examples the tail light is painted in the vehicle colour and the glass is orange/red. On later models the housing is then chrome-plated and the glass is completely red. The dark blue seat is the most comfortable seat that has found its way onto the Gran Sport to date and its dark blue colour goes very well with the silver metallic (MaxMeyer Code 15005). The trim on the fender is reworked and much more filigree.